A World in Twilight

Record of Twilight War is a game about heroes holding the hearts of dead gods in their bodies, carrying out a war that threatens to destroy the entire world. When valrite was discovered, the world changed overnight: machinery running on this magical fuel gave way to unprecedented levels of industry and growth. Populations soared, cities spread—and empires desperate for more fuel built weapons to war on the gods, to harness their very bodies for more. They took from the gods their vast stores of anima, and something more: their crystalline hearts.

Now inside the Vessels sit the transplanted hearts of dead gods, pumping magical essence through their bodies like fuel, turning them into inhuman war machines. Ambitious and hungry empires converge across continents, with their armies of millions, equipped with weapons destructive enough to end all life—and at their heads, their artificial demigod champions.

The world enters its twilight, and the final battle approaches.

Record of Twilight War is a tabletop role-playing game based on the LUMEN system, designed to deliver fast-paced, rules-lite, high powered action. Players take the role of Vessels: artificial demigods with magic running through their veins, capable of defeating armies singlehandedly. Combat is tactical but quick, running without the need for a map or long turns. Even as a power fantasy, fights remain tense and deadly—Vessels must spend their own life force to fuel their godly abilities, and sustain themselves on anima siphoned from their defeated foes.

The game is inspired by industrialized fantasy worlds such as Fullmetal Alchemist and Valkyria Chronicles, alongside the grandiose action and personal drama of the Dynasty Warriors series.

Record of Twilight War is currently presented as an unfinished alpha for the purposes of playtesting. As development on the game progresses, we will look into itchfunding to pay for art and layout, and the price will rise according.

Please send any playtest reports or feedback to DeusExBrockina@gmail.com, with the subject line "Feedback (Record of Twilight War)."

Please remember to rate and comment if you enjoyed the game! Every 5 star review makes my day!

Writing and Design by Brock McCord.

It is also Forged in the Dark. This work is based on Blades in the Dark, product of One Seven Design, developed and authored by John Harper, and licensed for our use under the Creative Commons Attribution 3.0 Unported license. 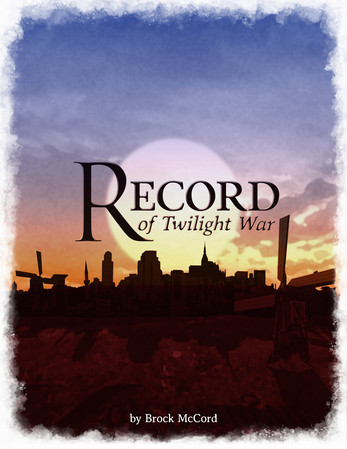